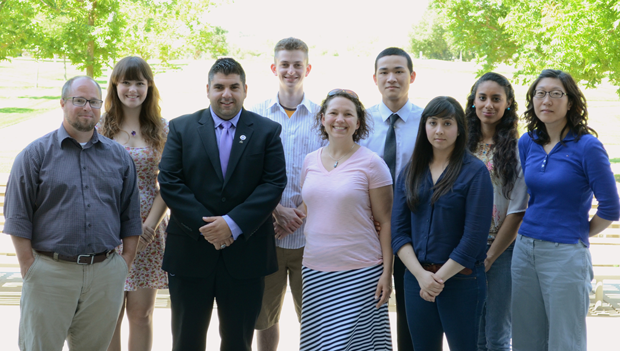 We are investigating the effect of surface modification on the photo-degradation of colloidal quantum dots (QDs). We functionalize the QDs with liquid crystal-like ligands in order to control the energy transfer between the smaller and larger dots in the ensemble. As part of this project, we study the photoinduced spectral changes in self-assembled thin films of CdSe/ZnS core-shell QDs under ambient conditions, and observe a reduction in photoluminescence quenching and a decrease in photo-oxidation. Following up with ultrafast dynamic analysis of QD emission, we observe that the smaller (energy donor) QDs exhibit an increased lifetime, while the larger (energy acceptor) QDs, exhibit a decrease in lifetime. We speculate that as a result of tuning the distance between the particles, the ligand exchange reduces the excitation of dark states via surface passivation or ionization. This ligand exchange allows for a more uniform dispersion of the QDs and may lead to an inexpensive option for improving stability for photovoltaic devices.

Microtubule-associated proteins (MAPs) are known to inhibit kinesin-based transport, which lead to various neurodegenerative diseases such as Alzheimer’s disease. Recent experiments, however, have shown that multiple kinesins transport can in fact overcome MAPs at low concentrations. Little is known about the performance of multiple kinesins in different concentrations of MAPs due to the difficulty in controlling the exact number of kinesin motors in vitro. We employ the Monte Carlo method to numerically simulate the travel distance of kinesin motors in the presence of MAPs based on experimentally measured parameters. Here we present the threshold spacing between MAPs in which kinesin-based transport loses 50 percent of its original performance and find that kinesin-based transport follows Michaelis-Menten kinetics. For all number of motors we tested, the mean travel distance reduces to half maximum at a MAP spacing of (400±100) nm. Our results indicate that all types of MAPs have the same effect on kinesin-based transport regardless of the number of motors present. Our results imply that there are some intrinsic relations between kinesin and MAPs, but the nature of those relations requires further study.

HIV infects more than 2 million people each year, so prevention of this virus is very important to human health. The goal of this project is to formulate HIV inhibitors into silk materials that can be used to prevent the sexual spread of HIV. Several proteins have been found to be very potent at inhibiting HIV entry into human cells. However, in order for these proteins to be effective, they require a delivery material that will slowly release a constant dose of the medication over the course of treatment. Silk fibroin, a natural and biocompatible protein, has the potential to form the ideal drug delivery material as its manipulable secondary structure allows researchers to optimize the material’s physical properties to fit their purpose. We report the formulation of HIV inhibitors in silk materials that have been processed by water vapor annealing to be insoluble in solution that mimics human body fluids and to allow the slow, constant release of our inhibitor over the period of a week. Various water annealing conditions, silk concentrations and silk to inhibitor ratios were tested to optimize the time-release profile of our silk fibroin delivery materials. Enzyme-linked immunosorbent assays (ELISA) were performed to quantify the amount of inhibitor released each day.

Although quantum mechanics has been around for nearly a century, we have only just begun to utilize it as a tool for building useful devices. The goal of our project is to utilize these properties like discrete energies and spin in a quantum mechanical device to measure something on the human scale with what we are calling the Gravity Spin Probe system (GraSP). The purpose of GraSP is to use the gravity field produced by heavy materials to act on a mechanical resonator, producing a measurable signal; the field will pull on a test mass deforming the system, effectively weighing the sample even without touching it. Quantum Dot Molecules (QDMs); solid state coupled quantum dot systems, are highly sensitive to strain and could be used to measure this extremely small deformation. Because of their size, QDMs show discrete energy states that are highly dependent on crystal properties, including lattice composition, geometry, strain, etc. Using an excitation laser, we can probe these energy states to detect changes in these properties. Our goal in this stage of the project is the fabrication of an atomic force microscope to introduce highly localized strain into QDM samples. We then use photoluminescence spectroscopy to measure the changes in the energy states caused by this deformation. If successful, this technology would enable not only quantum-enhanced motion sensing via the device proposed, but would pave the way for the use of coherent spin and phonon measurements to quantum-enhance other technologies ranging from medical diagnostics to geosurveying.

Optical Parametric Oscillators, OPOs, combined with solid-state lasers are the current state-of-the-art for generating wavelength short-pulsed laser radiation. New efforts are being made to replace optical crystals in OPOs because of the fiber OPOs performance in terms of wavelength tunability and spatial mode profile, as well as the packaging advantages of flexible optical fibers. These features are particularly important for advanced, nonlinear-optical microscopy. One major obstacle is to increase the output power of fiber OPOs to a level suitable for microscopy. Previews experimental results with fiber OPOs indicate that the variation of light’s polarization state within the fiber OPO impacts output power. We aim to quantify the impact of variations in polarization within silica (SiO2) microstructure fibers on the nonlinear-optical phase shift in a single pass. We measured spectral broadening due to self-phase modulation (SPM) for fixed average power and for various polarization states, and compared these results with simulation results. We conclude that polarization dynamics have a negligible effect on the nonlinear phase shift, Φ = γPpeakLfiber, in a single pass.

Hydrophobin proteins, which are produced by fungi, have unique surface-attractive properties, including an affinity for hydrophobic surfaces. These properties could make them useful in drug delivery systems, but their absorption to hydrophobic surfaces is not well understood. In order to advance in this area, the synthesis of a variety of model hydrophobic surfaces is necessary. As such, we have synthesized monounsaturated organosilane-functionalized silica surfaces via cross metathesis of terminal alkenes. We have applied cross-metathesis reactions to surface functionalization in two complementary ways. Initially, we focused on metathesizing a terminal alkene hydrocarbon and an alkene-terminated trichlorosilane prior to surface immobilization. Later, we cross-metathesized terminal alkene hydrocarbons directly onto an alkene-terminated surface. We have characterized the functionalized surfaces by measuring the surface tension of water droplets in contact with them. These surfaces will be used to study their interactions with hydrophobin proteins.

Poly(dimethyl)siloxane (PDMS) is an elastomeric polymer used in microfluidic and biomedical applications due to properties such as optical transparency, deformability, and ability to be molded into micro patterns through soft lithography. Systems that mimic cell membranes are designed by depositing lipid bilayers on plasma oxidized PDMS surfaces. The temporal stability of lipid bilayers on hydrophilic PDMS surfaces however, has not been investigated. Previous researchers showed that plasma treated PDMS stored in ambient air remained hydrophilic for 24 hours. This lab examined the temporal stability of lipid bilayers deposited on plasma oxidized PDMS, (hydroxyethyl)methacrylate coated PDMS, and carboxymethylcellulose (CMC) coated PDMS through small unilamellar vesicle fusion. The stability of the bilayer was quantified by monitoring the average fluorescence intensity of the lipid bilayer, which contained the fluorescent lipid rhodamine-DPPE (or 1,2-dioleoyl-snglycero-3-phosphoethanolamine-N-(lissamine rhodamine B sulfonyl) ammonium salt), and the fluidity of the lipid bilayer using fluorescence recovery after photobleaching (FRAP). Experimental results were compared with concurrent measurements of static water contact angles on the same PDMS surfaces without lipid bilayers. This study correlated water contact angles, which measure surface hydrophilicity, with lipid bilayer stability. Our findings showed that lipid bilayers are stable on treated PDMS surfaces for multiple days, with CMC coated PDMS supporting lipid bilayers for five days. These results provide a benchmark for the suitability of conducting long-term studies of lipid membrane biophysics on oxidized PDMS surfaces.

Organisms are believed to have developed an internal clock system through evolutionary adaptations to routine environmental cycles. Elucidation of the precise mechanism of the internal biological clock is of interest as it may have significant implications in understanding and treatment of sleep disorders and jet lag. Due to the complexity of the human system, our research focuses on a simplistic, model system found in the cyanobacterium Thermosynechococcus elongatus. This oscillating system consists of three proteins, KaiA, KaiB and KaiC, and is responsible for maintenance of the ~24-hour circadian rhythm. KaiA promotes KaiC autophosphorylation (daytime) and KaiB promotes KaiC autodephosphorylation (nighttime) in an oscillatory fashion, which regulates global gene expression in cyanobacteria. It is currently understood that wild-type KaiB exists in equilibrium: tetramer-dimer-monomer, and that the monomer possesses the ability to contribute to a temporal delay to maintain rhythmicity by fold-switching. To better understand this fold-switching mechanism, we have engineered a nine amino acid truncation in the N-terminal domain of KaiB (KaiB-N9) by using polymerase chain reaction. An 15N-enriched KaiB-N9 was expressed in E. coli then purified by affinity and gel filtration chromatography for subsequent structural characterization by nuclear magnetic resonance (NMR) spectroscopy. Structural characterization of this mutant will allow us to explore the role of KaiB fold-switching in the clock's rhythm.